PrimeXBT Lead Analyst Kim Chua: Lawsuit Upper Hand Sends XRP Price Rising
The price of XRP has rallied sharply recently on the back of positive developments pertaining to the SEC lawsuit with Ripple.

The latest update on the Ripple lawsuit seems to be giving Ripple the upper hand. Thus far, US judges seem to agree with Ripple more than with the SEC. This became especially clear after the March 23 hearing where 2 significant events advantageous to Ripple sent investor confidence in XRP soaring.

First, the judge of the lawsuit, Sarah Netburn, was observed to have suggested that the XRP cryptocurrency is more like a currency than a security.

Secondly, observers also noted that the SEC, in one of its defences, unintentionally implied that exchanges that list and allow the trading of XRP would not violate any regulation. What happened was that on the March 23 hearing, the judge questioned the SEC lawyer that, based on his theory, “everyone who sold XRP – including you and me – are selling illegal securities”, after which the SEC lawyer responded, “no, under Section 4, only Ripple and affiliates of Ripple can have sold XRP illegally”, and that “everyone who sold XRP” was not selling “illegal securities”. The statements by the SEC lawyer can be interpreted that exchanges will not be held liable for the sale of XRP. Under Section 4 of the Securities Act, only Ripple and its affiliates could be accused of illegal sales. This was a case-turner for the price of XRP since it would mean that exchanges may start relisting it again.

Positive price action began building momentum during this time, where social media attention on XRP soared. The number of XRP-related posts on different social media networks skyrocketed, with over 80% of all the social interactions bullish about XRP, out of which a campaign called “RelistXRP” was initiated and trending on Twitter in the USA.

This positive social engagement has led many large investors to add more XRP to their portfolios. According to on-chain data, large whales with more than 10 million XRP tokens have started increasing by significantly since March 24, just 1 day after news broke.

A crypto exchange named Lykke, based out of Switzerland, has thus decided to re-list XRP. Subsequently, a rumour emerged on April 3 that Coinbase was going to relist XRP. The rumour mill began to churn when a Twitter user going by the name Krish xrp hinted that Coinbase could be readying to relist XRP. Krish xrp noted that backend work was already underway at Coinbase, while attaching a screenshot of Coinbase back-office API with XRP coding on it.

While there has not been any confirmation from Coinbase yet, this rumour sparked an explosion in XRP price, with it surging from pre-rumour level of around $0.60, to a high of $1.12, its highest level in 3 years, within the first 48 hours.

On top of this, on the discovery hearing on April 6, Ripple received another shot in the arm when the court approved Ripple’s request to gain access to SEC Documents on BTC and ETH, something that will be very helpful to Ripple for fighting its case.

Already, someone found something advantageous for Ripple and posted it on Twitter. 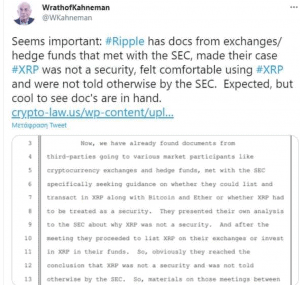 These developments caused investors to FOMO back into XRP, creating a mad rush to buy as many investors have already sold XRP when news of the lawsuit broke in December last year. Now that Ripple seems to have the upper hand, investors are back in droves hoping to purchase XRP before the ruling.

On the technical front, this rush to buy caused the price of XRP to over-extend and a undergo a healthy retracement between $0.90 and $1.00, which is a crucial support area for XRP to build a new base in order to support a move higher. The price of XRP also formed a “Golden Cross” mid-March, a sign that the price of XRP is going on a strong uptrend. Price subsequently broke out of a cup-and -handle bullish formation on the weekly chart, with the upthrust being confirmed by a triangle breakout on the daily chart with a price target of $1.50. With the initial price objective being already hit, price may consolidate a little since it has tripled in a week, however, the chart is still looking bullish for XRP and there is the possibly that price may swing up parabolically to test its ATH of $3.30. Where it goes after that however, may depend on the outcome of the lawsuit as well as sentiment in the broad crypto markets .

Meanwhile, there is additional information favouring XRP that seems to be overlooked by the market. On March 29, the court granted a group of XRP holders the right to file a motion to intervene in the case against Ripple by April 19. The holders blame the SEC for inflicting monetary losses on them when the XRP price plunged in December. As April 19 draws near, we could be in for exciting times when XRP investors gather to trounce the SEC, which will inevitably cause volatility in XRP’s price to rise again.

Another interesting event that is developing is a petition to drop the SEC lawsuit. Crypto & Policy founder, Thomas Hodge, has started a Change.org petition directed at the SEC chairman nominee, Gary Gensler, asking him to end the SEC’s lawsuit against Ripple once he’s confirmed as chairman of the commission. The petition alleges that former SEC chairman, Jay Clayton, and his SEC Director of Corporate Finance William Hinman, for “favouring” BTC and ETH while harming XRP.  While the petition may not necessarily raise the price, it definitely will be able to generate more awareness and hype in the XRP token.

With the rise in price, XRP has moved up to number 4 on the crypto top 10, just behind BNB. Progress in the lawsuit may further send XRP roaring back to the number 3 spot which it used to occupy, wiping the past few months away as just a small hiccup in the bigger scheme of things. 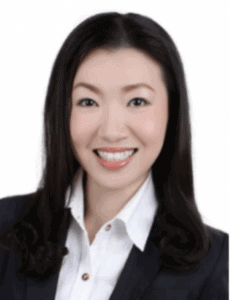 Kim Chua is an institutional trading specialist with a track record of success that extends across leading banks including Deutsche Bank, China Merchants Bank, and more. Chua later launched a hedge fund that consistently achieved triple-digit returns for seven years. Chua is also an educator at heart who developed her own proprietary trading curriculum to pass her knowledge down to a new generation of analysts. Kim Chua actively follows both traditional and cryptocurrency markets closely and is eager to find future investment and trading opportunities as the two vastly different asset classes begin to converge.

GALA Price Prediction As Gala Games Hits Up For 2023

Artificial Intelligence and Cryptocurrency: The Rise of AI-Focused Projects in 2023